Angry Birds™ Yoga – How to Eliminate the Green Pigs in Your Life, Part I

This is the first part of the “Angry Birds™ Yoga” series. Other parts will be published in the upcoming days. 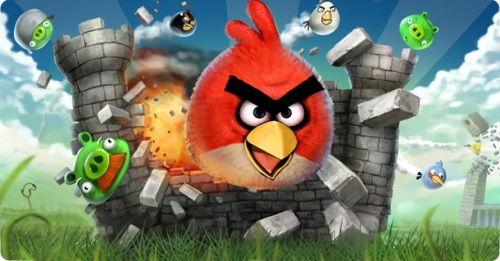 The Yoga Masters of yore would often derive lessons from common events of village life and nature. Gone is village life and hardly anyone gets to live in nature, so where should we look to for those important life enhancing yoga teachings? Well, Angry Birds™ of course!

What does each bird really represent? What are those green pigs? What is the hidden meaning of those different blocks? What is the slingshot? All this will be revealed, and your path to enlightenment and a blissful life made clear.

Angry Birds™ is the world’s most popular mobile game and was developed by Rovio Mobile Ltd., with over 50 million downloads by late 2010. In it you have to use different kinds of birds, propelled by a slingshot, to break apart bricks of different materials, to eliminate green pigs! Who would have guessed that behind this bizarre scenario lay gems of wisdom!

Yoga is an ancient path of wellbeing, both physical and mental, and ultimately a path of enlightenment, that continues to rapidly grow in popularity throughout the world. The ancient texts of the “Yoga Sutra” and “Bhagavad-gita” are the most famous in the tradition, but others, such as the Upanishads and the Srimad Bhagavatam (or Bhagavata Purana) are studied by those seeking a richer understanding.

Filed under Realizations on Krishna Consciousness

27 responses to “Angry Birds™ Yoga – How to Eliminate the Green Pigs in Your Life, Part I”